Transit Alliance’s “Where’s my Bus?” Campaign sheds an interesting light on the direct relationship between cuts in service and cuts in ridership.

Transit Alliance (TA) began last year as a direct response to proposed cuts to bus service. Through their campaign, they were able to add a $15 million patch to the county budget to make up for bus and rail cuts.  While this is a victory, Miami-Dade continues to haphazardly cut bus routes, negatively affecting ridership and our county’s traffic problems. This year, TA has begun a campaign, focused on explaining the root causes of the drop in ridership on County Buses.

Bus ridership has dropped approximately 20 million rides over the course of 5 years, representing a drop of about 5% annually. The study by TA attributes this to an increase in free trolley rides and an increase in cars per capita. The trolleys are a popular transportation method in dense areas, having frequent stops, and operated for free by Municipalities. They offer first or last mile solutions, however, they do not help for long trips often needed by commuters. By design, they cannot cross city lines, creating a disjointed system and often cannibalize popular bus routes along their same routes. While trolley ridership is up, it only accounts for a 4 million rider uptick, leaving 16 million lost rides unaccounted for.

These unaccounted for riders can be explained by the increase in cars per capita. Over 3 years (2013-2016), Miami-Dade residents have increased 70,000 while the number of household cars increased 254,000. Poor public transit options have pushed people back onto the street in cars, exacerbating traffic as bus cuts only continue. 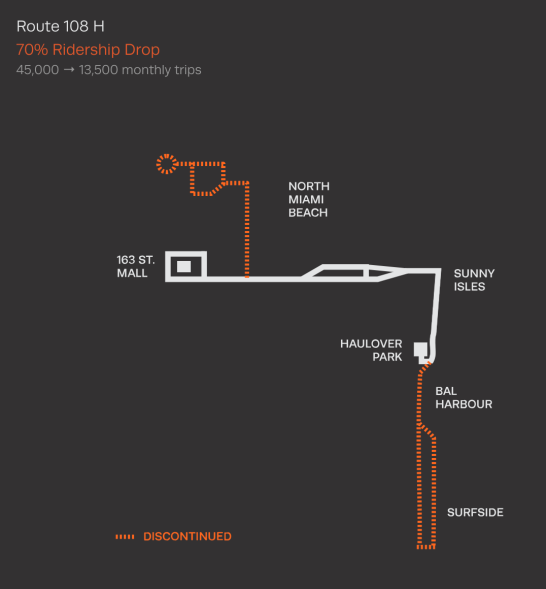 In the past year, 33 bus lines have faced cuts or have been discontinued out of the county’s approximate 100 routes. Above are what some of those cuts look like when they involve route changes. Some cuts involve frequency drops, leading to passengers waiting over 60 min for a bus. These cuts create direct drops in ridership, and for some lines, such as #6 or #249, it leads to them being discontinued altogether after rounds of cuts.

By far the #1 complaint about the bus system is the schedule, and by schedule, I believe they are speaking about frequency and lack of adherence to the prescribed schedule. TA did an analysis on what it calls “Ghost Buses” or buses that were scheduled but did not show. It found over a 3 month period, 2,103 Ghost Buses. There may be a driver, but the bus is not prepared, or it has to be pulled out of service, or the driver never showed. Either way, these represent buses that are supposed to be on a route and do not show up for their prescribed slot dozens of times a day. This unreliability gives people no option to take the bus when they have to be on time for work, a meeting, or an event.

This Transit Alliance Campaign has 2 weeks left focusing on the Route Network and Solutions, however, these first few weeks on root causes can help us understand a lot about the unintended consequences of Miami-Dade County’s decisions in this space. Drops in ridership have led county officials to drop reliability, which in turn drops ridership, adding cars to the street, creating traffic. This cycle is detrimental to our overall goals as a city, and will always be a dark spot on our growth if we cannot see the pattern and work to reverse it.