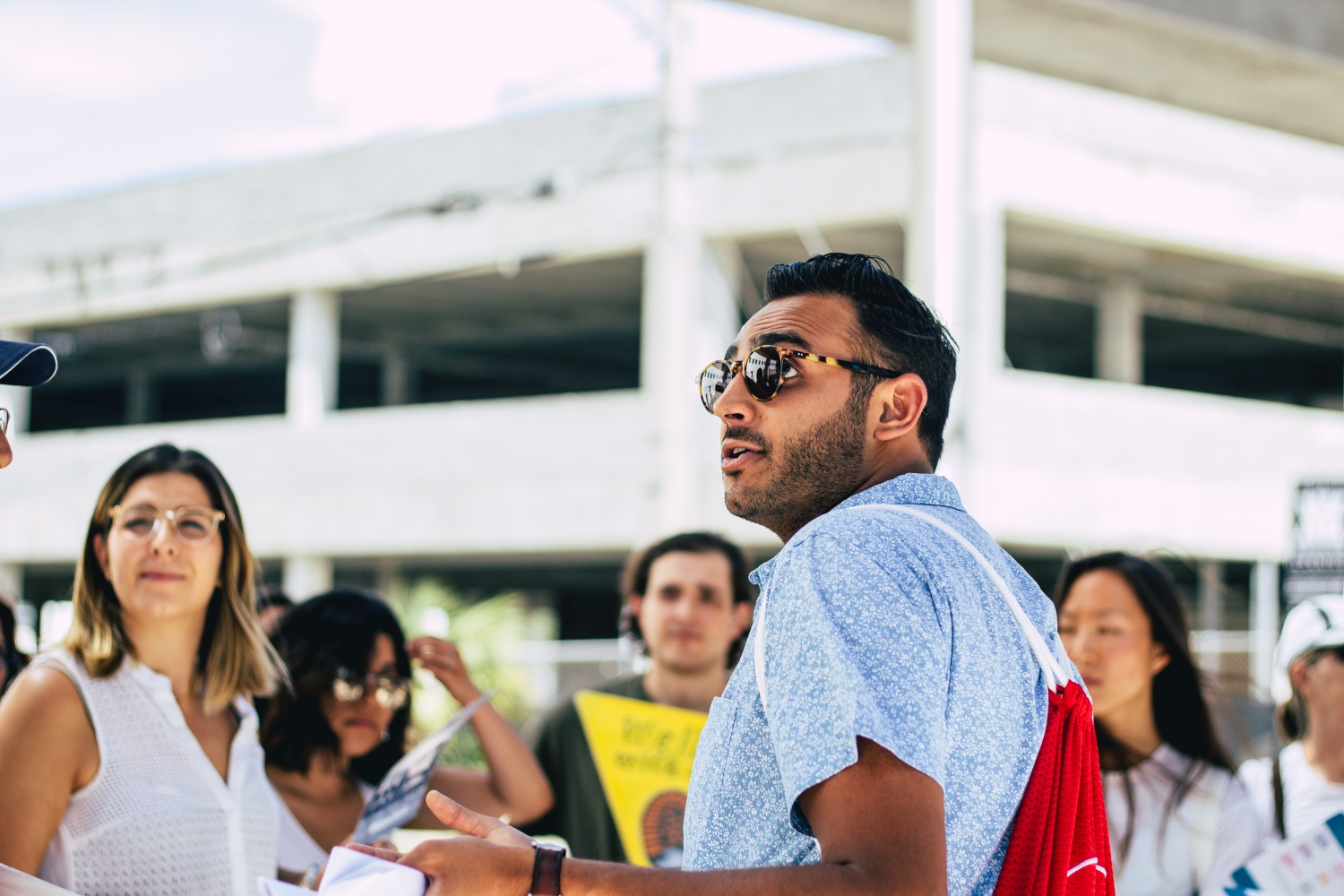 An unconventional tour through West Downtown, discussing how the River, Flagler’s Railroad, and I-95 affected the development of the City. 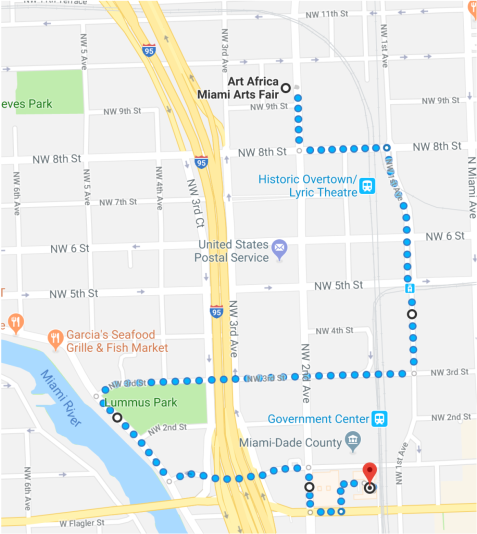 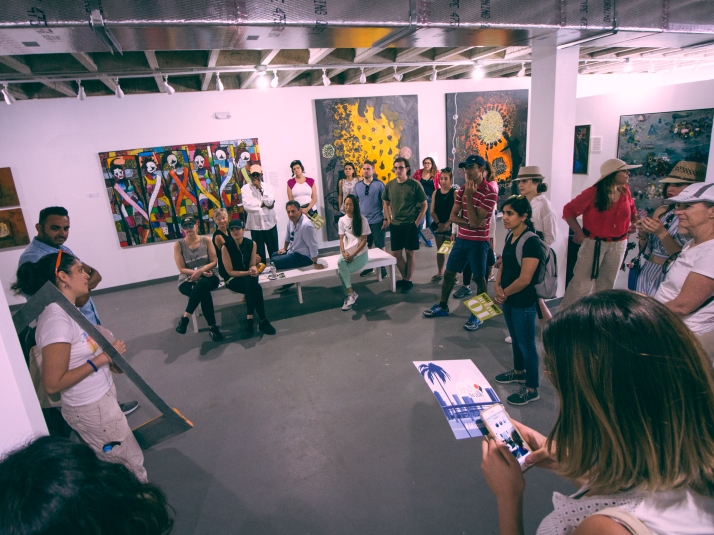 We began our tour at the Art Africa Miami Arts Fair Gallery, who graciously agreed to open up for us on a Sunday. The gallery space was originally an old Billiards Hall during the early part of the 20th century, where black luminaries spent their evenings when visiting Miami. It later became a space of Muslim worship and hosted Muhammad Ali’s conversion to Islam. Today it is a beautiful gallery showcasing African and Afro-Caribbean art from around the world. 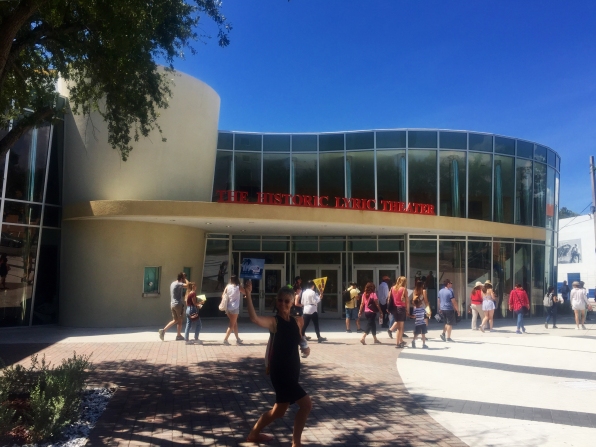 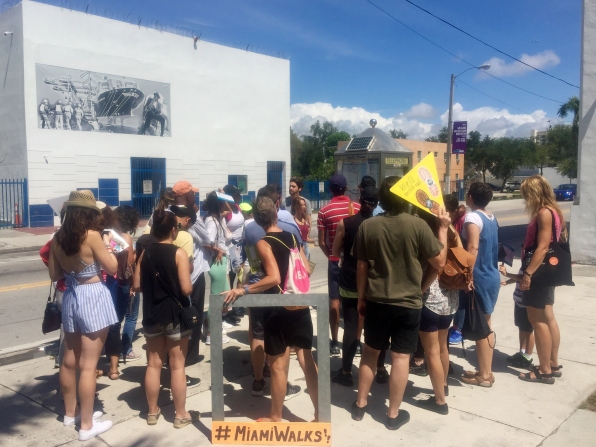 We then stopped at the Historic Lyric Theater, a 400 seat theater built in 1913, which hosted artists such as Ray Charles, Ella Fitzgerald, Sam Cooke, and James Brown at the height of the neighborhood. We then stopped at a bus stop and discussed the history of Overtown’s transition from Colored Town to Overtown with the construction of I-95, decimating its population in 1965. 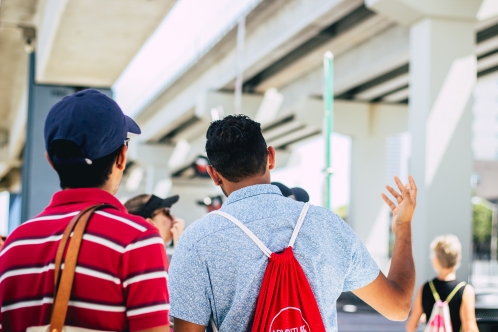 We then passed over the historic Flagler railroad, discussing how it created 2 sides of the city, segregating colored from non-colored residents in 1900. 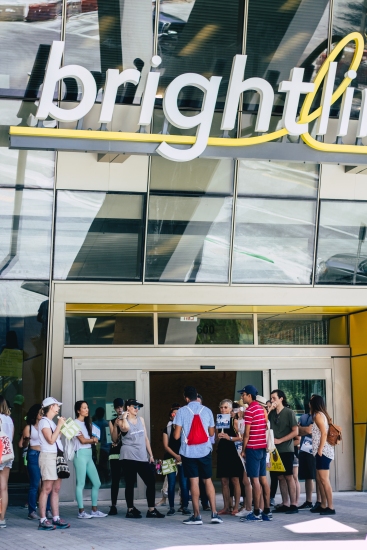 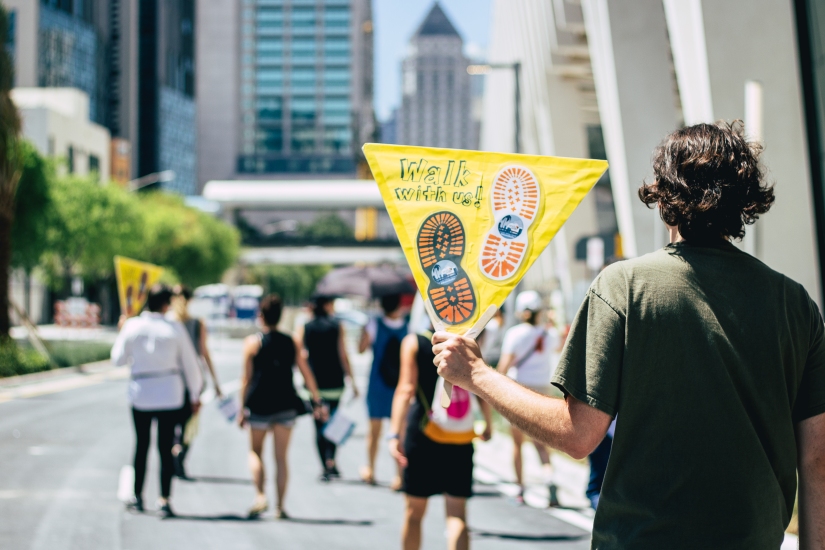 Next, we analyzed the Brightline construction site and noted how it acts to lift itself off the ground, creating a place and not a boundary in the city. 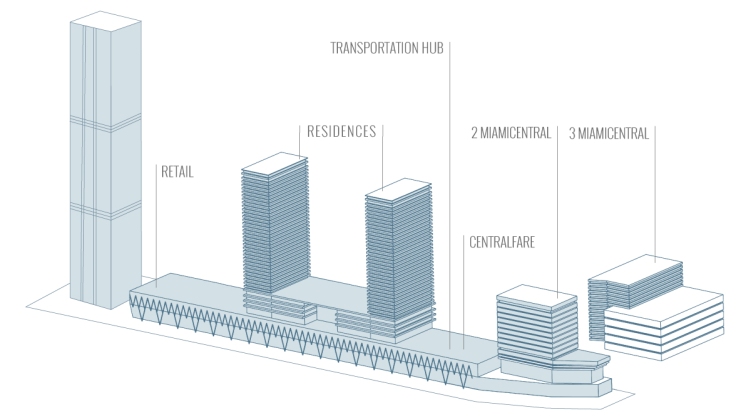 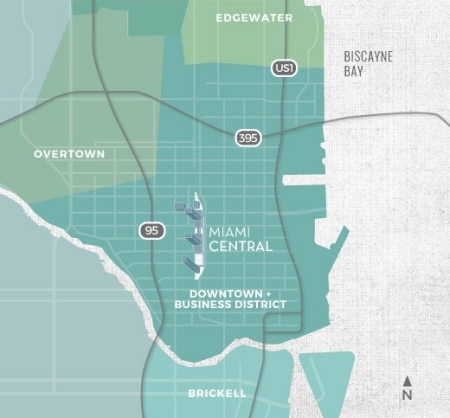 The MiamiCentral is a multi-block long site that is a mixture of retail, residential, and office uses. This project was built along the historic Flagler rail corridor, mimicking the old boundary, but working to counteract it. 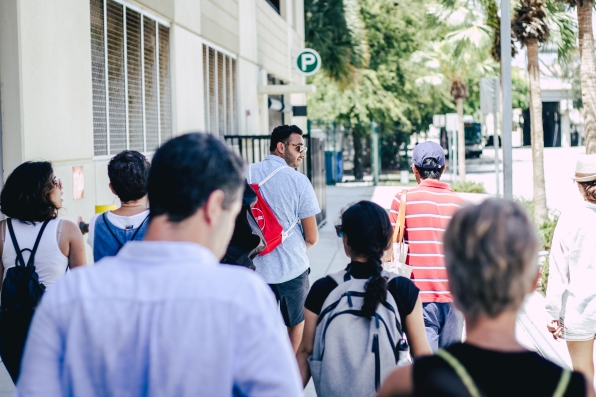 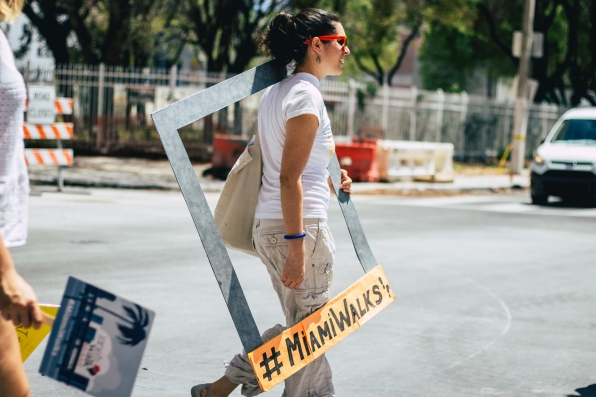 Naomi, the leader of Miami Walks

Continuing, we passed by the Federal Courthouse and the County office building on the way to Lummus Park 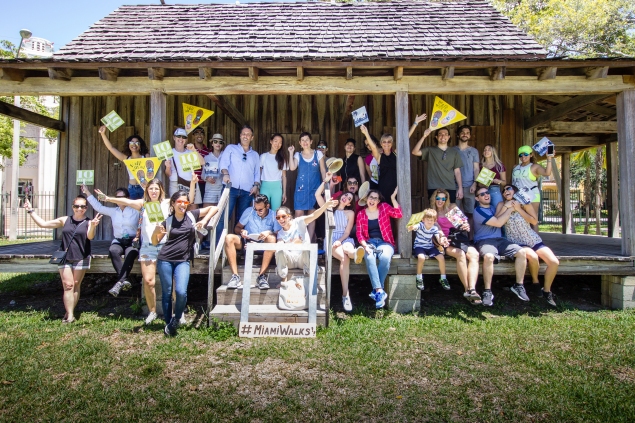 In Lummus Park we saw the historic residential district surrounding it, the Barracks from Fort Dallas, and took a picture at the Historic Wagner house, the oldest standing home in the City (built in 1855). 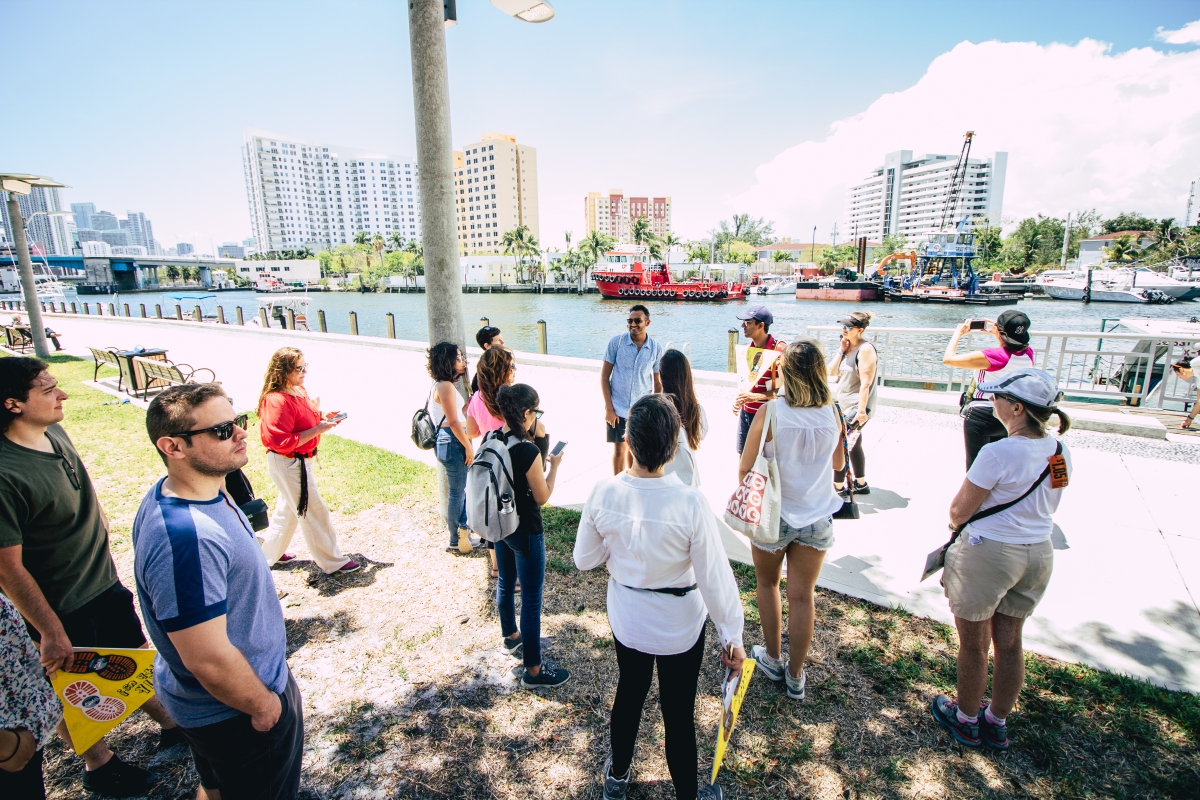 Making it to the Miami River, we discussed how its shape determined the location of Miami, from the Tequesta Indians, through Julia Tuttle to today’s Downtown! We also noted the burst of redevelopment projects along it. (See article mentioned on the walk here). 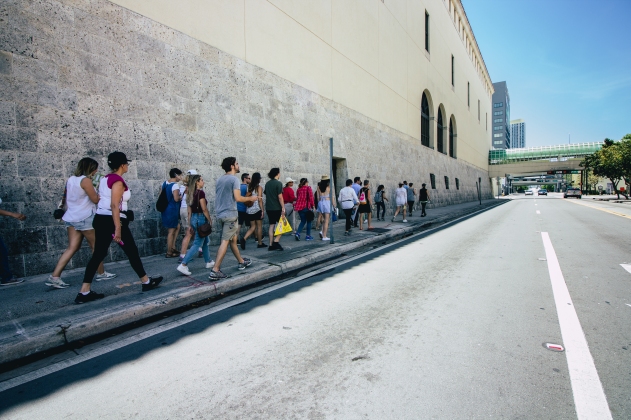 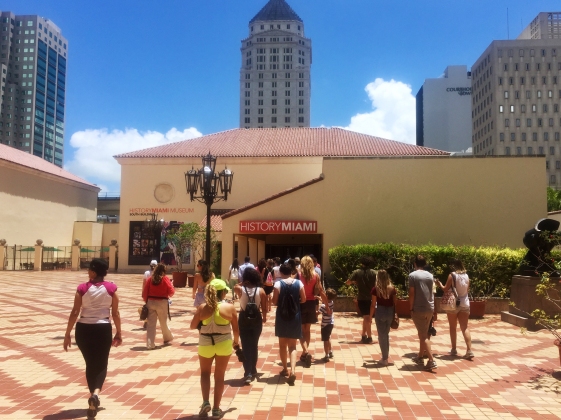 We ended our walk at the HistoryMiami Museum, who graciously gave us free admission to their entire collection, including their new exhibition on Street Traditions of Miami. A seemingly fitting end to our walk!