After spending $14.24 million and hurting hundreds of businesses, FDOT left Flagler St. in the past, squandering a major opportunity on a historic corridor.

In March of 2016, the Florida Department of Transportation began a roadway improvement project on Flagler Street, from Second to 27th Ave. This included new sidewalks, stormwater management, street lights, and curb improvements. This project was set to cripple businesses along it for 2+ years but was supposed to create a better experience for shop goers and owners. Finally, after years of construction, the first blocks of this project are finally opening, and the verdict is not good. 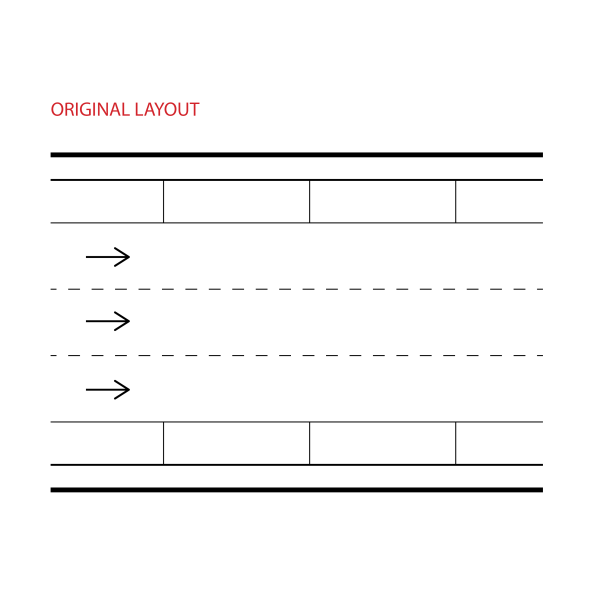 The design outcome looks like a project that could have been built in 1960: three parallel lanes pushing cars downtown at high speeds with a thin bike lane exposed to the street. The bus stops share space with the parallel parking, causing the buses to constantly move in and out of the bike lane, sometimes sticking out into the adjacent lane. The project does not follow any modern conventions about street design or transit and ignores the importance of this corridor in the city as a place of transportation, commerce, and density.

The bus lines on the Flagler corridor are some of the most used in the city.

The No. 11 Miami Dade Transit Bus that goes from FIU to Government Center along Flagler Street is one of the most used buses in the system, with over 10,000 average weekday boardings (12,500 before construction began). The Flagler Corridor has been marked as a high transit corridor, and this has changed the parking requirements for multi-family and commercial buildings built within a 1/2 mile of it in the City of Miami Zoning Code. In order to supplement this change in zoning, and to make riding the bus a more attractive option, a dedicated lane should have been built to match the incredible foot traffic the bus receives. [See below for a potential layout of the project]

Within the same parameters, this would have helped to alleviate traffic in the long term, protect bikers, create a better sidewalk experience, and add more parking or green space in lieu of the bus stops.

A larger problem is a separation and lack of coordination between jurisdictions. While the state controls the Road, the county controls the Transit, and the city controls the zoning code. This split in decision making and communication causes failed projects like this to occur. The local officials are blamed without having any responsibility for the design, coordination, or effect on businesses and residents. The state plans far in advance without input or flexibility, and the county does not coordinate their transit system with long-term infrastructure improvements. 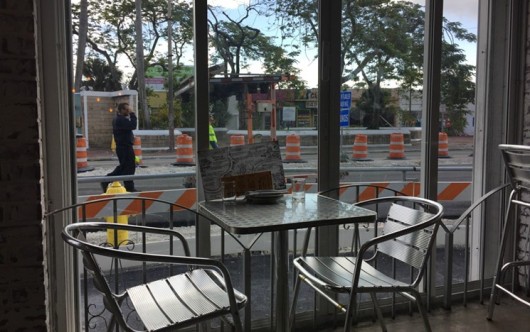 Construction on Flagler has hurt hundreds of businesses along it.

While stormwater prevention was the initiation for the project, this necessary infrastructure is, and will continue to be, an opportunity for our city to build better. Stormwater and sea level rise will be the impetus for a majority of our infrastructure projects moving forward. From Miami Beach’s street raising efforts on the west side; to Downtown Miami’s king tide problem; to Shore Acres’ low lying homes’ drainage. These projects will garner attention and deserved money, but small changes in the design that add little cost can help the future of these corridors and the neighborhoods they serve.