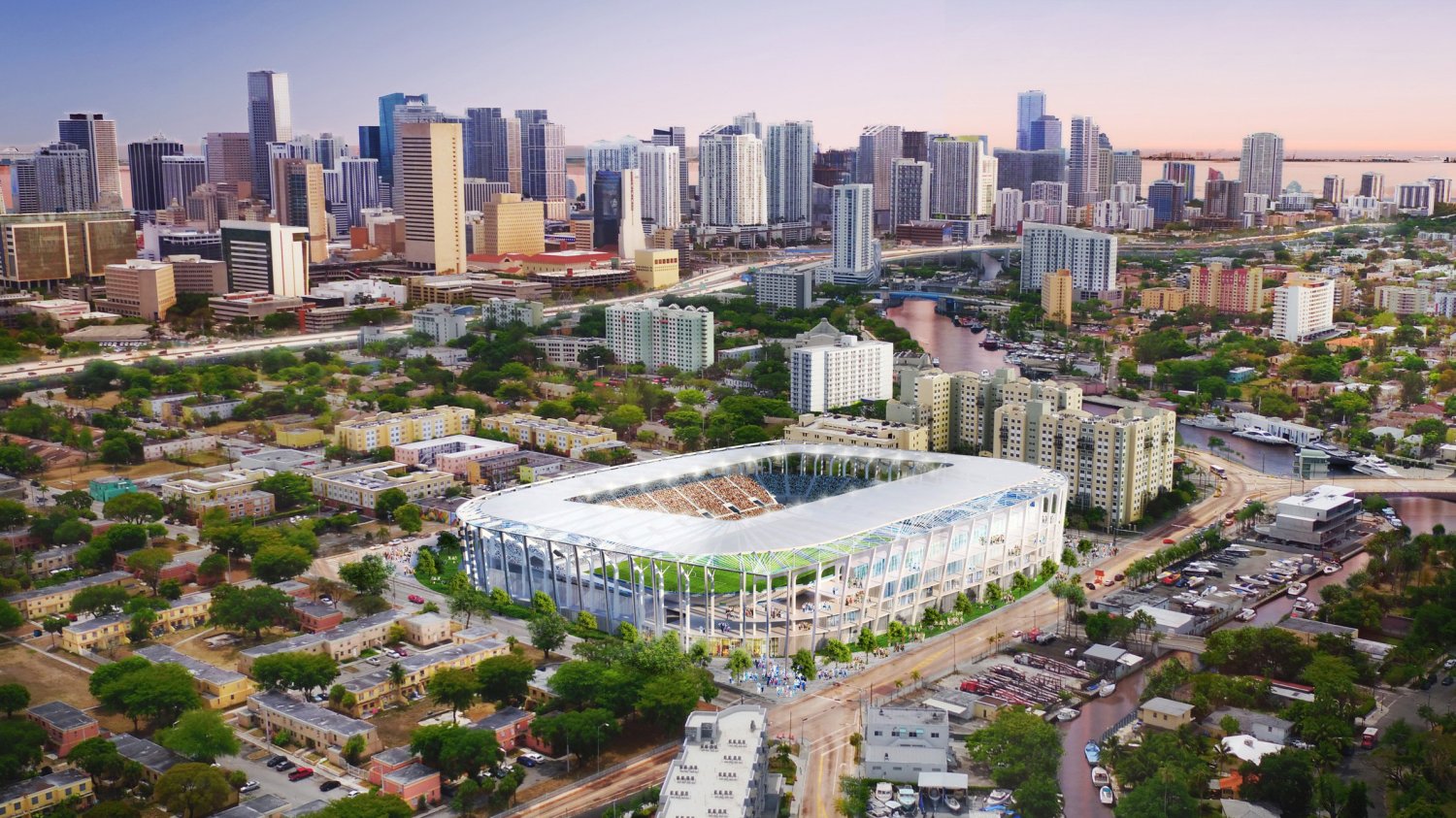 How Miami pushed a run of the mill bad stadium deal, into a new kind of agreement.

On Tuesday, June 6th, 2017, Miami Commissioners cleared the largest hurdle of a 4-year battle to bring an MLS team and stadium to Miami. The vote was specifically to allow a 3-Acre Parcel of County land to be sold for the stadium grounds, completing a 9-Acre assemblage along the Miami River. This process began with a proposal for a curvaceous stadium located on Biscayne Bay and given for free. It is ending with a better solution for a nuanced, simpler stadium design located in Overtown, and fully paid for by its privately funded ownership (The Miami Beckham United Team). 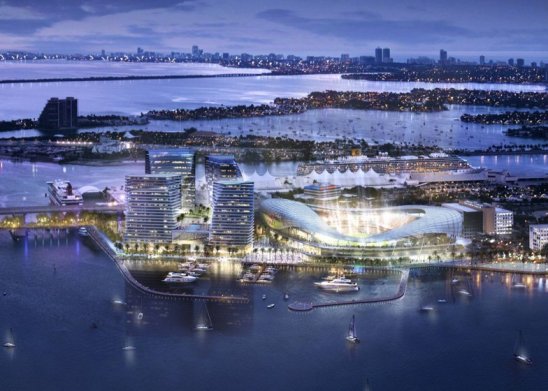 Initial Stadium Proposal on Watson Island, along the McCarthur Causeway, by Architectonica

When David Beckham first proposed a new MLS team in Miami, it is important to understand the context. In 2009, only 4 years before Beckham’s proposal, the county approved $400 million in bonds to build a new stadium for the Marlins in Little Havana. The total cost of the stadium was close to $500 million and sits mostly empty on game days. For fronting the bill for the stadium, the City was entitled to no revenue from the stadium or property. Not property taxes, naming rights fees, non-game stadium rentals, tickets, boxes, or concessions.

The Marlins deal is particularly angering, especially this past month, as a deal to sell the team at a massive profit was publicized. This deal would give zero dollars to the taxpayers that made the team so valuable through their risk taking, while all of the profit would go to Marlins Owner Jeffrey Loria.  An owner who, despite asking for hundreds of millions of dollars from the county, refused to open his books to show the later reported profitability of the team. There is also reporting that shows how Loria paid himself and Marlins President, Samson, millions as “contractors” to the team, through a Wikileaks dump of internal Marlins accounting books. There is much more to cover with what was wrong with the Marlins deal that later led to the recall of Mayor Alvarez, but this article is about the new deal for an MLS stadium. While The Miami Beckham United Team may have started with a proposal similar to that of the Marlins, it was quickly made clear by Mayor Gimenez and others that it would not pass and they had to find another solution. 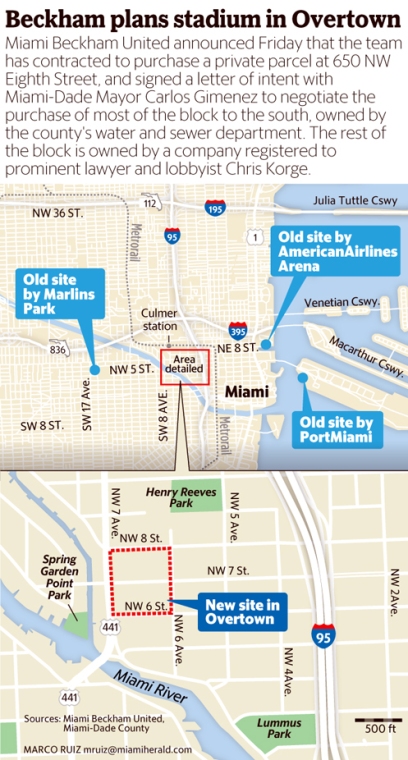 After looking at a number of sites, the MLS stadium will be built in Overtown.

A major part of the Beckham deal that cannot be overlooked is the role of Major League Soccer (MLS). A usual “expansion fee” for a new MLS team runs at about $150 million. When Beckham signed with the LA Galaxy, he was given a sweetheart deal of $25 million for a few minor concessions. They required him not to change the city once announced, and a Downtown location. This did not allow Beckham to shop around in different cities, or vie for a suburban location. He had to find a spot in Miami, and he wanted it to be waterfront. This gave the city the power in the negotiations, where they did not give any concessions in taxes or bonds, and sold the land to the future owners at market price. It was a new precedent for a city that had given money to every other sports team on multiple occasions. 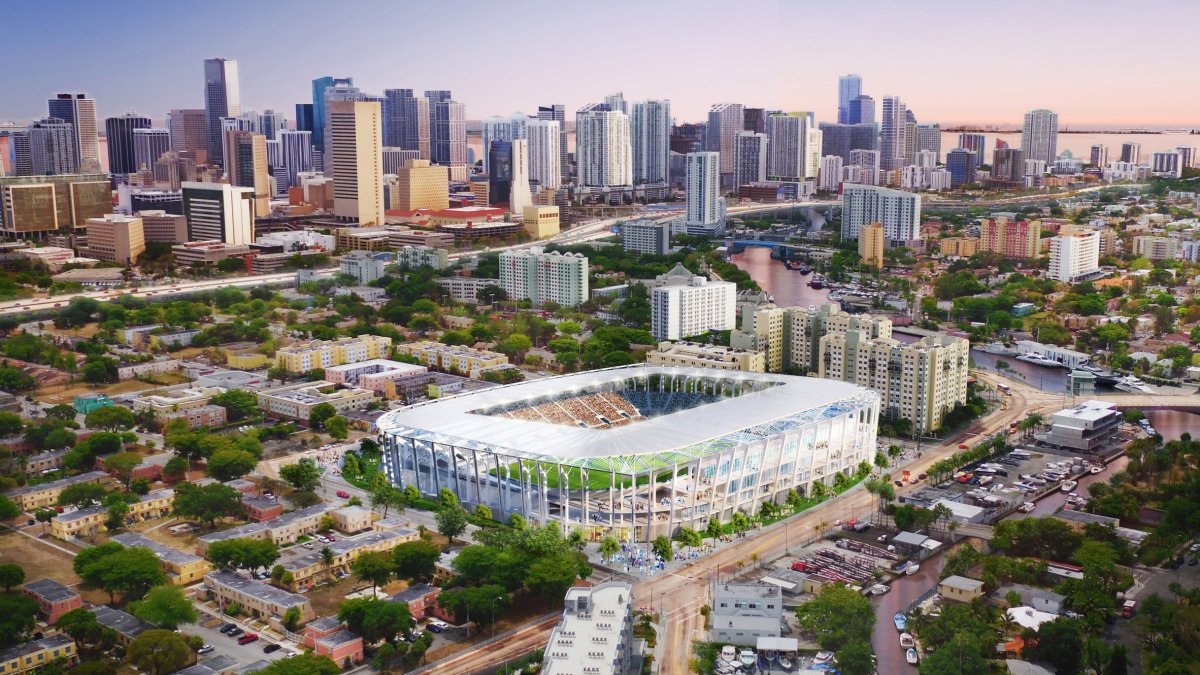 Render of final Stadium Proposal in Overtown by Populus Architects

The site in Overtown is a bit of a strange choice, given the parking proposal. The stadium plans to offer no on-site parking, expecting all to take Metrorail, bus, ride-share, or water taxi to games. Miami has had a storied past with the car (See previous article Vroom City), however in a situation that is not recurring, this could work. It is not the perfect site by any means, but it does have all of the pieces needed. It is two blocks from the rail line, and if they properly create off-site lots with free shuttles, as well as water taxi service, it may become a simple part of arrival to the games. The overall design is slender, non-invasive, and porous. It interacts with its community and creates visual connections between fans and people. This is a welcome breath of fresh air from the originally flashy, enclosed proposal.

This privately funded deal will be good for the investors who went into it, good for the city that will reap taxes from it, and good for the people of Miami who will have new city institution to be proud of. Between 2000-2010 the US has spent $12bn in taxpayer money in sports stadiums. If other sports organizations do not stop demonizing the cities that they depend on, then their sports will begin to be demonized by those that pay for them. The NFL, NBA, and MLB are large profitable organizations that will ruin their fan bases if they continue to blackmail and coerce City Governments into paying for their excessive needs. Perhaps by waiving large “expansion fees,” like the MLS, and other owner roadblocks, they can afford to build practical stadiums that do not burden taxpayers but still provide a cultural institution that everyone can be proud of.

John Oliver on on City Stadiums:

The original version of this article claimed the MLS gave a discount deal on the expansion fee for the city, not as a part of the LA Galaxy contract.