Here are, in my opinion, Miami’s most important buildings and the stories behind them. 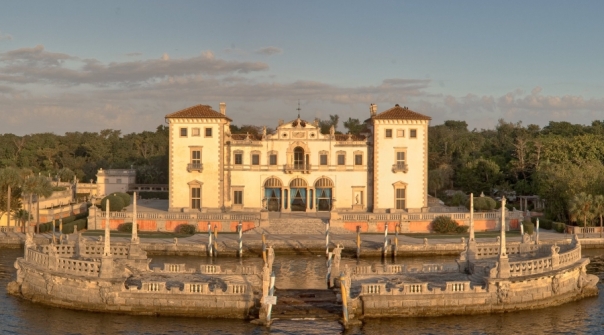 Built as the Estate for Gilded Age businessman, Jon Deering, Vizcaya is a 180-acre property that represents one of the many estates of early businesspeople in South Florida. These include the Merrick House, Deering Estate, and Flagler’s Palm Beach. This is the most lavish of those and included 180 acres of land and manicured grounds around it. Today it stands as a memento of early wealth and pioneers of Miami, selling sunshine and real estate while looking for their own escape. 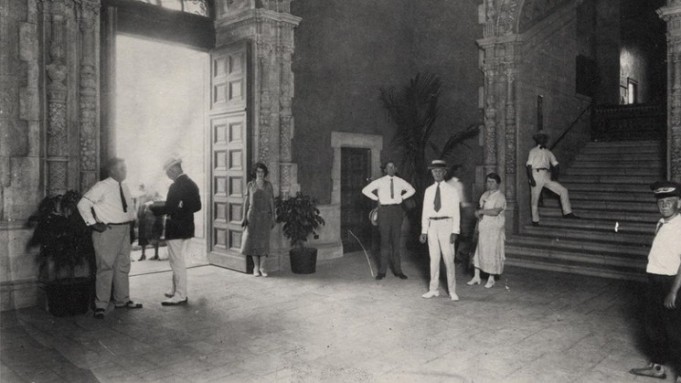 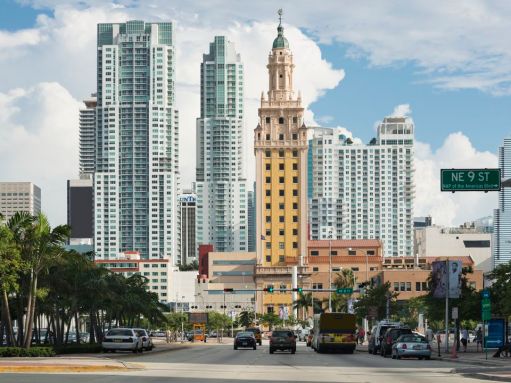 Once the tallest building in Miami, this Spanish inspired tower was originally built for the Miami News Company as their Headquarters. Designed by Schultze and Weaver, it was inspired by the Giralda tower of the Cathedral of Seville. When the company moved to a new HQ on the Miami River, the federal government used the building to process refugees arriving from Cuba to Miami during the Castro Regime. It was during this period (from 1962-1974) where the building became known as the Freedom Tower. After this, the building was bought by Miami Dade College and became part of its downtown campus. Today it serves as a museum with some office space for the university; But of course, it mainly stands as a reminder of the tyranny of the Cuban revolution that forced so many to leave everything they had and find a new life in the United States. 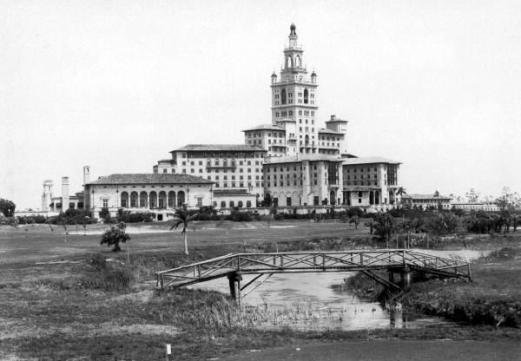 Built by Coral Gables developer, George Merrick, the Biltmore Hotel once housed celebrities, large golf tournaments, and swim shows in what was once the largest pool in the world. Designed also by Schultze and Weaver, it was reminiscent of Northern Spanish architecture and boasted large, lush grounds and attentive staff. During WWII, the hotel was converted by the Federal Government into a Military Hospital. After the war, it remained a Veterans Hospital and shared the property with the University of Miami. In 1968, it stopped being used as a hospital and the University moved out. It became an abandoned building until 1987 when the city of Coral Gables poured $55 million into renovating and reopening the property as a hotel. Today it hosts many events and sits as a successful hotel and beautiful marker of Miami’s history. This storied building has had many lives and will continue to be an important piece of Miami’s past and present. 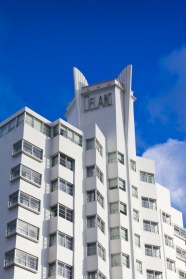 Pronounced Del-uh-no Hotel, it remains a hot spot on South Beach and a prime example of Art Deco building. Named after Franklin Delano Roosevelt, the Hotel was built in 1947 as the tallest building in Miami and was first used as military housing before its intended use as a Hotel. While it sits within the bounds of Art Deco, many argue that it begins to reference Miami Modern style, creating a crossover project that helped inspire many other buildings in South Beach. Art Deco’s rule of three is prominently displayed on the undulating facade, reinventing this type as it is commonly used in elevation, not plan as in this hotel. In elevation, the Delano has a distinctive crown that adorns the top and creates a recognizable profile from all over the beach. In the 90s, Philippe Starck redesigned the interiors, keeping it both fresh and luxurious. It remains a recognizable property that created a model for South Beach Hotels. 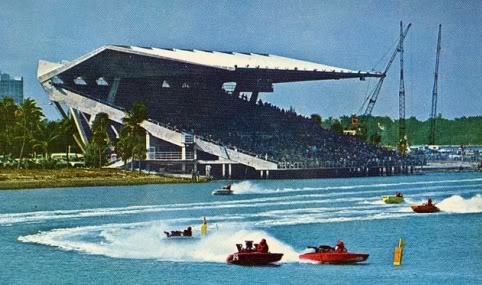 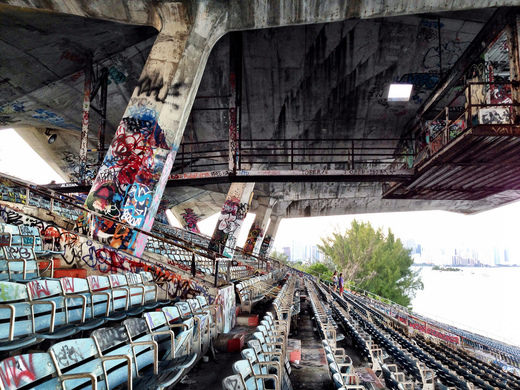 Built originally for powerboat races, the Miami Marine Stadium has a long and storied history. It has been used for concerts of artists like Sammy Davis Jr., speeches by President Nixon, and the annual Miami International Regatta. It has even been used as a boxing arena. The stadium is entirely cast in concrete, with a dramatic folded plane ceiling and breathtaking views of Downtown Miami. New Cuban Immigrant, Hilario Candela, designed the stadium when he was 28 years old, and it has stood as an example of concrete functionality and beauty since. In 1992, the building was condemned after Hurricane Andrew and has sat vacant since, becoming a haven for graffiti artists and photographers who trespass onto the property. The stadium has $45 million earmarked for its revitalization, including shoring up the structure and building a floating stage. Hopefully, this exciting event space can gain a second life in a city experiencing a Rennaissance of events and an influx of people. 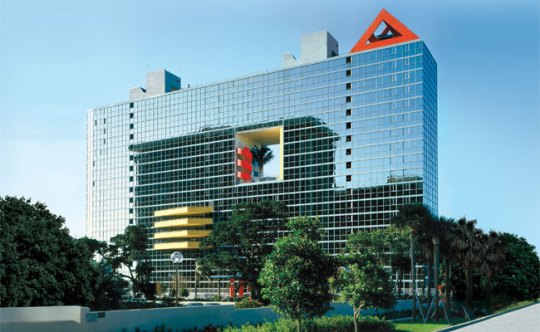 In the early 1980s, when Arquitectonica was a bold young design firm looking to get a name for itself, the Atlantis Condo was built in South Brickell on Biscayne Bay. It was immediately awarded a Progressive Architecture award and signified a blending of the facade of the banal skyscraper with the geometric elements of postmodernism and the primary colors of Bauhaus design. It showed the world that Miami could play in the international discussion of Architecture beyond Art Deco, and helped the city move past the typology. Arquitectonica would later move on to design Miami staples such as the Omni Development, 500 Brickell, and the American Airlines Arena, as well as buildings all over the world. 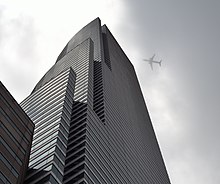 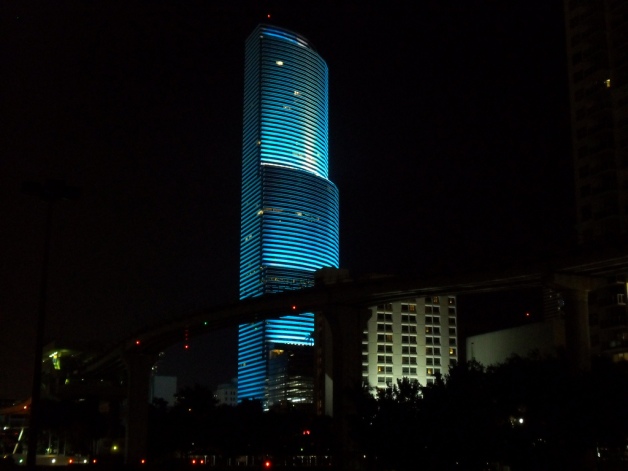 The Miami Tower is one of the most prominent buildings in the skyline, and a remnant of the economic boom of the 1980s. This IM Pei designed building was optimistic in its design and use. Formerly called the Centrust Bank Building, it featured the country’s first elevated metro stop in a building, allowing the metro mover to pass through it. It also featured a sky lobby adjacent to a 10,000 sqft outdoor terrace. The tower is also adorned with a $1.5 million LED light system that caters its colors to special events, local sports teams, and holidays. The Miami Tower is an icon of the 80s, and still remains one of the most important buildings in the skyline. An interesting profile, memorable lighting design, and sky metro stop ensure its future as a Class A Miami Office building that is here to stay. 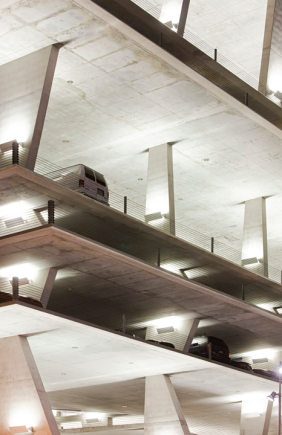 Designed by Swiss architects, Herzog & de Meuron, it is one of the most iconic parking garages in the world. In the car-obsessed metropolis of Miami, it sits like a beacon on the corner of Lincoln Rd., lit in multi-colored LEDs, welcoming all to rethink these garages as they know them. The structure is formed of V-shaped columns and poured slabs with well-detailed knife edges. It has been described as a house of cards like structure, borrowing from Brazilian brutalism, and the tropical typology of a deep facade. The building also has ground floor retail, a retail shop on the 5th floor, and luxury residential on the top floor, with 300 parking spots on its many levels.

Most importantly, it served as a marker of Miami’s readiness for a large influx of starchitect projects. Developer Robert Wennett, by wanting more from his parking garage, sent a signal to the architecture world that Miami was next. Since then, architects like Zaha Hadid, Rem Koolhaas, Frank Ghery, and Bjarke Ingels have designed and completed projects in Miami. 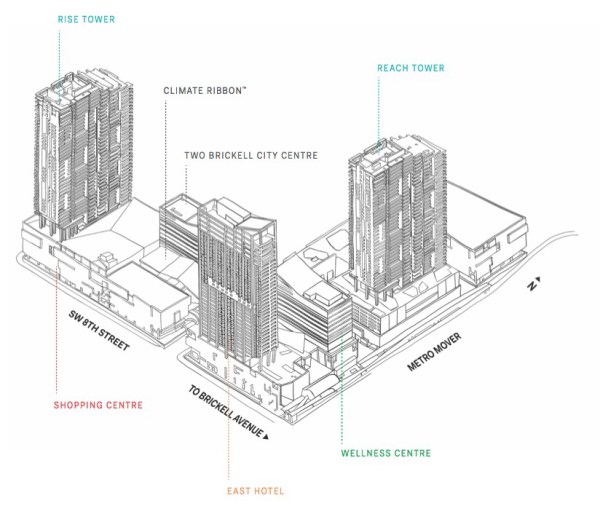 This project is simply programmed as a mall, but the project reinvents the typology in a way that will be copied and reimagined all over the country. A true collaboration between architect, Arquitectonica, and developer, Swire Group, the project acknowledges the new structure between disciplines. This is not just a shopping center. It includes a hotel, 2 condo towers, an office building, and a wellness building. This is a “ground floor” retail project which sits inside a plinth, hovering above active streets. It funnels air through its ceiling fins to create a cool micro-climate inside its walls without AC. It has added hundreds of thousands of square feet of retail in a world where retail is in decline but has filled almost all of its space. The project has successfully programmed 3 city blocks into a continuous and connected project that has enhanced Brickell and brought new life to its streets, creating a model for the greater region and beyond.