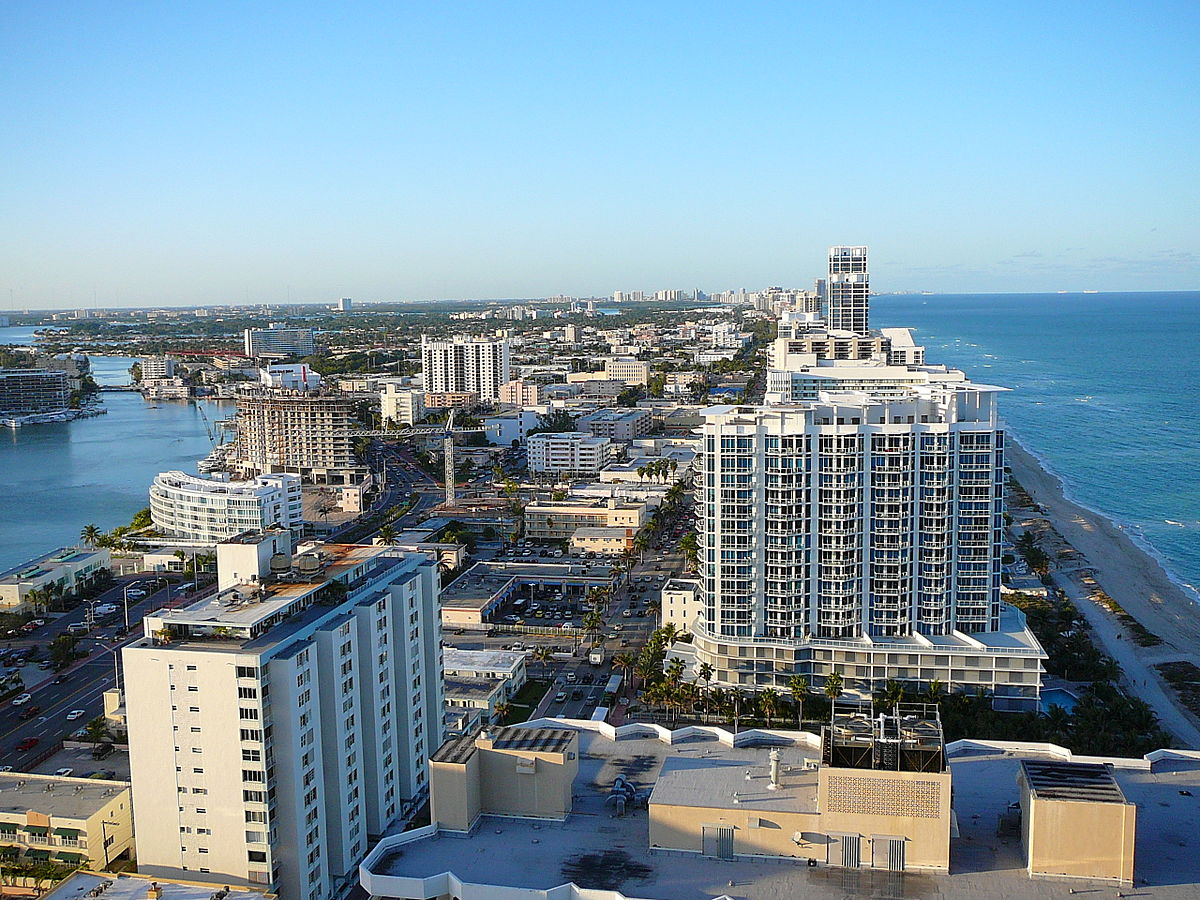 The North Beach Master Plan is a learning experience for many towns along the Eastern Seaboard. In it is a plan for resiliency that has many hits, and a few key misses.

North Beach is a dense and vibrant residential community on the northern edge of the City of Miami Beach (from 63rd to 87th St). It includes 3 islands, a dense, historic, low-rise residential fabric, classic large condo buildings along Collins Ave, a slew of mom and pop retail, and the Normandy Isle Bridge to the mainland. It also recently approved a large scale master plan in order to add resiliency to this thriving community. 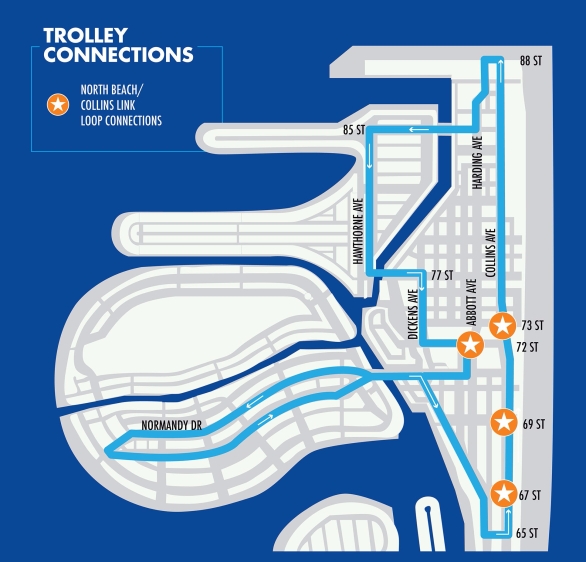 Trolley Map to illustrate the location and geography of North Beach, Miami Beach

The North Beach Master Plan was approved October 2016 with a unanimous vote from the Miami Beach City Commission. The 189-page document is the result of months of community meetings, and work from town planners Dover Kohl. It includes 5 main points in its executive summary:

Let’s peek into each of these categories, and use North Beach as an example for small towns along the eastern seaboard. 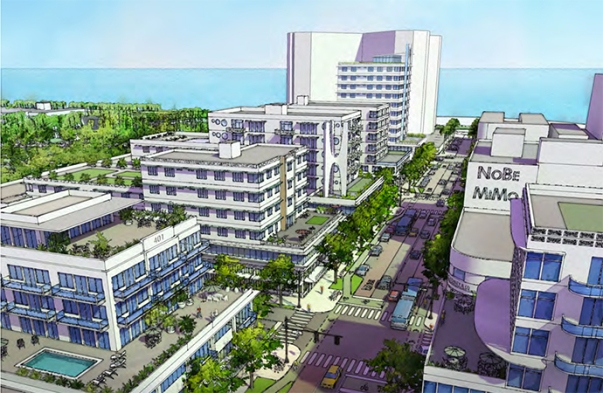 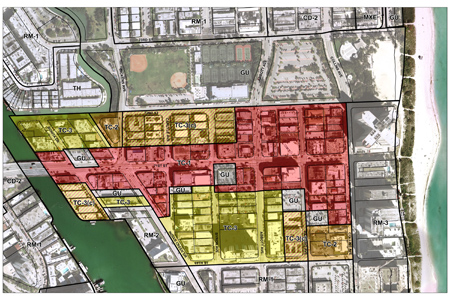 All great small towns revolve around a town center. North Beach’s has always been an informal street, 71st St, leading to the Normandy Isle Monument. The master plan proposes upzoning this area to allow for building up to 175′, creating a more pedestrian friendly streetscape, and adding a central green on the current 72nd St. parking lot. The main detriments to this plan are the hodgepodge of owners currently in this area, usually owning about 7500 sqft each of land. In order for this project to be successful, large acquisitions need to be made and financed. Buyers would need assurances before taking such risks, and the city needs to get more involved and possibly offer commercial lease incentives. In addition, The master plan calls for use of the Byron Carlyle Theater site, currently owned by the city, as a catalyst. The programming and maintenance of this site are crucial to illustrating that a project can work there. 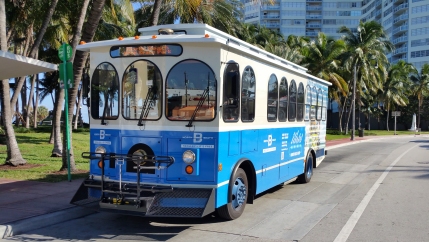 Anyone that has been to North Beach knows that the area has a serious parking problem. This is why a major part of the resiliency of the town is a transportation question. Most of the building stock in the area is pre-1970s, meaning that most were built without parking. This has caused an absurd amount of street parking needed in the area that can only be exacerbated through public transit and building updates. Ironically, it is this concentration of older buildings has kept rental prices low, making North Beach a great location for those working in hospitality and entertainment throughout the city, with 26.2% of residents not having a car. Thankfully, Miami Beach has been improving its trolley system, and new bike lanes and denser retail should incentivize some in the area to ditch the car for other means of transportation. The master plan calls for dedicated bus lanes, bike lanes, and extended sidewalks. New businesses in the area should also help to create a car free community, as many could potentially walk to work. Miami Beach has always been a walkable city, and one of the areas in Miami where living car-free is a viable option, and the master plan reflects this. 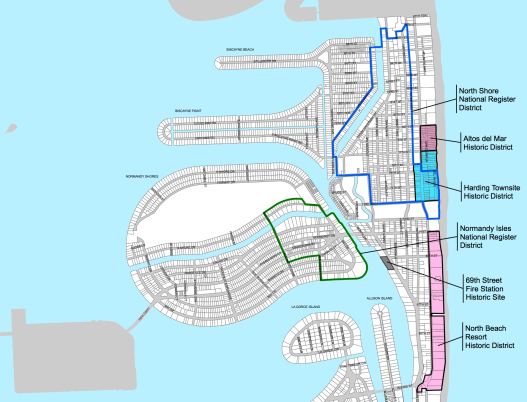 Although it has a fairly sterile name, this has been one of the most contentious items of this plan due to its connection to historical preservation. A large portion of North Beach is designated or subject to historic preservation laws and regulations. This may be the single biggest obstacle to truly creating a resilient community here. No one wants to destroy the character and density of this thriving residential community, however, living conditions are worsening and the sea level is rising.

The practical implications of this create an opportunity for development. The master plan suggests creating 2 specific historic districts as a precursor to upzoning, but this plan has not been approved by the council. It also casts too wide of a net and does not allow for enough development or freedom. Select parts of this district can and should be saved, but large parts of it must be upzoned in order to survive. In doing this, it gives historically designated buildings an ability to sell air rights around North Beach. This would give the historical buildings funding to improve while creating an economic engine in the residential areas. This burst of construction should add needed parking, infrastructure funding, and buildings that can last a lifetime.

MiMo Architecture in the Area

Most do not know that the city owns a lot of land in North Beach in prime areas. Most should be kept as pocket public space for relief from the density. A lot of these pockets should also double as floodable zones, as many are in low lying areas along the bay. The city also owns a string of parcels along the North Shore Open Space Park. This area can act as a functioning transition or buffer zone between the park and the residential fabric. This plan calls for these to be various public use facilities, but this is an opportunity for fundraising and private partnerships. The city should implement a competition that brings low-density commercial property and public space to those parcels on long leases. This would bring income to the city, while also leaving options open for the future. The city should also not just pick the best lease proposal, but the proposal for the property that would best utilize the site, injecting use and life to the buffer between the park and the residences.

This is self-explanatory, but zoning laws should reflect the 50-year sea level rise estimates, and the city should be working diligently in combating the known risks of climate change. Without this, there is no future for Miami Beach.

North Beach is a community with incredible potential and life. This master plan is a step in the right direction, but should not be written in stone. Smart leaders and community members should still take an active role in shaping their neighborhoods based on new information and ideas. All plans are works in progress, and this process is an example for vibrant towns everywhere.